I love this photo as it’s informal as opposed to the usual highly posed studio ones. It was taken at Beckett’s Park, Headingley which is up the hill from where most of them lived in Kirkstall, Leeds. I’m not sure who everyone is but I can pick out:
– Third from the left crouching is my grandfather James Fraser
– Standing with her hands on her hips abd back to the camera is my great-aunt Edith Green who later married Joseph Martin (funny how can I pick her out from the way she’s standing!)
– With the cricket bat is my grandmother Clara Fraser nee Green
– The rather plump lady towards the right in the hat is my great-grandmother
– Second from the left in the cloche hat is my great-aunt Ethel Jessop nee Green 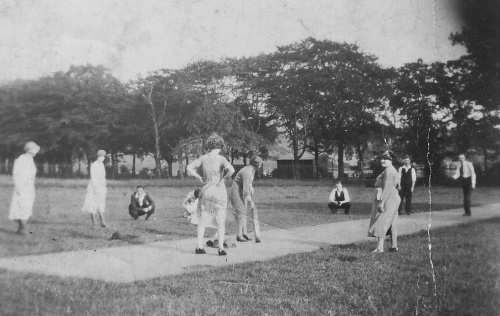 And this one was taken on the same day.
– Sitting on the grass third on left is my great-aunt Ethel Jessop nee Green
– The couple standing on the right are my grandparents, Clara Fraser nee Green and James (Jim) Fraser
– The first child from the left is my mother’s cousin Margaret Jessop, who became Margaret Johnson.
– Next to Margaret is my aunt, my mother’s older sister.
– Second from the right, in front of her parents, is my mother, Dorothy Strachan nee Fraser. 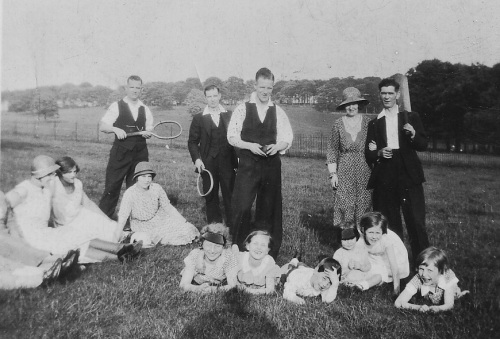