At last – a McCrae breakthrough

If you worry at a problem for long enough a solution will appear. This has just happened with my McCrae brick wall.

My gg grandfather John McCrae was born in about 1839/40, and married Mary Ann Mcinairney in 1861 in Kilmarnock. On his marriage certificate he gave his parents as John McCrae labourer dead and Mary McCrae ms Henderson dead. I found a death certificate for his mother Mary but not for his father. Mary McCrae died in 1860 and her son John gave her parents’ names as John Henderson labourer dead and Jean Henderson ms McCrae. That Mary Henderson married a John McCrae and also had a mother called Jean McCrae is possible, of course, but has always bothered me a bit. But despite a thorough search, I failed to find him or his mother in the 1851 census. It did occur to me that they might have been from Ireland: in the census John McCrae has his birthplace as Kilmarnock except in the 1891 census where it says he was born in Ireland.

I was also aware that when ScotlandsPeople put the 1851 census online they mucked it up and the Kilmarnock records were missing. I’ve no idea when they fixed it, but fix it they have. This week I was prompted to look again (thank you Rob for bringing up the subject of McCrae research again) and found this:

I am positive this is the right John McCrae for several reasons:
– His mother was Mary Henderson
– He called one of his daughters Susan Bell McCrae
– His wife Mary Ann had a half sister called Sarah McKinnon who married William Donigan
– A bearer was the early name for a coal drawer, a job boys did in a coal mine
I don’t know who Martha Todd was but haven’t yet researched her.

I have no idea why they are all called lodgers. However, the entry for John has been added in afterwards by the enumerator, so must have been missed off when the enumerator was first copying the individual forms into his book. Very easy for a mistake to have been made, or for him to use ditto marks when they didn’t actually apply.

Then, of course, I looked for Mary Henderson, and not Mary McCrae, in 1841 – and there she was: 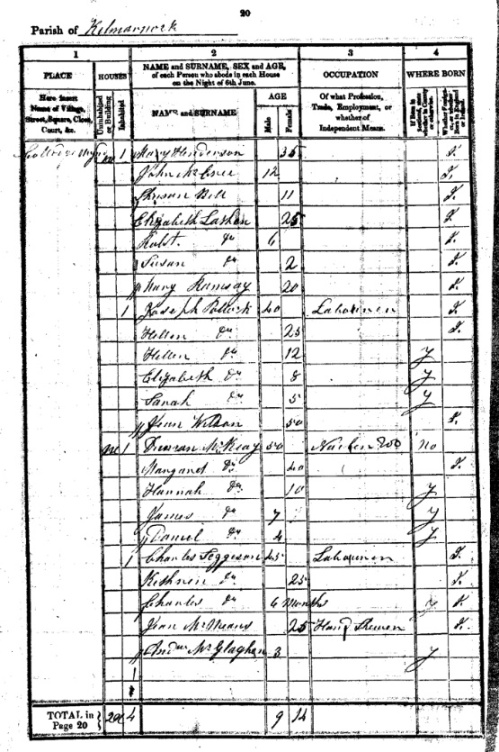 It must be the same Mary Henderson and Susan Bell. John McCrae is listed as age 12 – but could that have been 12 months and not 12 years? Has the enumerator made a mistake when copying the form into his book? I haven’t researched the Lathan family yet, but it seems as if Mary Henderson took in boarders to help provide her with an income.

College Wynd is close to Strand Street, where Lawson’s Land was, and is close to Fore Street where John McCrae was living in 1861. 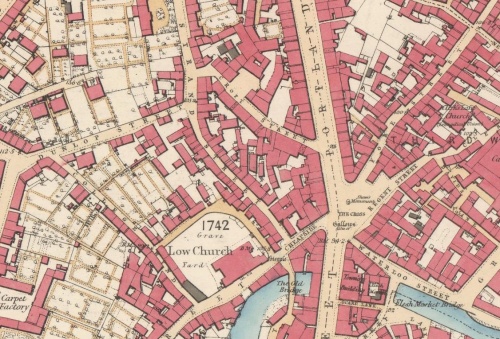 So it is looking very much as if gg grandfather John McCrae originated in Northern Ireland, somewhere in Country Antrim, and arrived in Kilmarnock with his mother Mary Henderson when he was only a few months old.

An additional link to these census entries is that in 1850 Susan Bell married Jacob Owens. In 1851 Susan Bell is said to be married, and Jacob Owen was living just a few doors away (and is on the next census page) with his mother and siblings, and his entry also says he is married. Very frustratingly, I’ve been unable to find a death certificate for Susan Bell or Owen/s on ScotlandsPeople, as I’m desperate to know who her parents were!

However, during my searches (which were aided by the very helpful Jonn on RootsChat – always a good place to post your problems) I discovered that John McCrae and Mary Ann McInairney had a child born in 1881 who died at 6 weeks old. He was called Jacob Owens McCrae.

There is now lots more research to do on my McCrae line, but I need to flex the credit card and buy more credits on ScotlandsPeople before I can go further. It also means research on that line takes me to County Antrim. I’ve avoided delving into Irish records as I know a lot were destroyed, so finding people there is difficult. But it looks like I’m going to have to bite the bullet and have a go.

This entry was posted in Family history, Genealogy and tagged McCrae. Bookmark the permalink.

5 responses to “At last – a McCrae breakthrough”