The Strachan and Lindsay line: with photos

Thank you Cathy in the USA for sending me details and some lovely photos of her Strachan and Lindsay ancestors. Cathy and her husband are about to leave for a trip to the UK and I’ll be meeting up with them when they spend a couple of days in York before heading up to Ayrshire. She is descended from my ggg uncle Samuel Strachan, the brother of my gg grandfather Robert Strachan, so she and I share ggg grandparents John Strachan and Agnes Neilson, which makes us 4th cousins.

Samuel Strachan’s daughter Janet married coal miner Alexander Lindsay on 3 February 1860 at Dreghorn. Janet and Alexander lived long lives, staying in Dreghorn and having a large family. In 1910 their Golden Wedding celebrations were written up in the Kilmarnock Standard, and I’ve posted about that at http://wp.me/P34D39-4l

Cathy has sent some old photos she has in her possession. 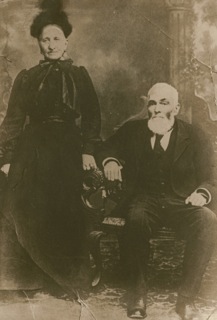 Janet Strachan and her husband Alexander Lindsay taken, it would seem, in 1910 when they celebrated their 50th wedding anniversary. 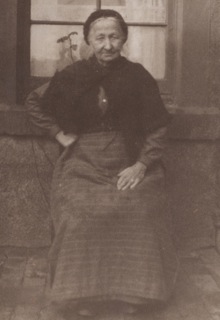 Janet Lindsay nee Strachan born 1839 at Shewalton Colliery, and who died in 1927 at Dreghorn. She had 11 children, including a set of twins.

In March 1877, Janet and Alexander’s daughter Mary Lindsay was born at Mill Bank Row, Dreghorn. In 1881 the family are at Hunters Land, Dreghorn Village. It must have been a crowded household as there were 10 children all living at home and, with a husband and 4 sons all working as coal miners, life must have meant an awful lot of hard work for mother Janet. By 1891 the family had moved to Bowling Green Terrace, Dreghorn and Mary Lindsay, age 14, was an apprentice dressmaker, possibly working with her elder sister Maggie who was a dressmaker.

Mary married coal miner William Littlejohn, also of Dreghorn, on 3 February 1899 at Dreghorn. Mary was 21 and a domestic servant, and one of the witnesses was Janet Lindsay. This is probably Mary’s younger sister.

The Littlejohns migrated to the USA. William Littlejohn, collier age 31 from Irvine, is on a passenger list to New York in 1907, travelling with James Lindsay miner age 25 from Irvine, both going to Dawson, New Mexico. James was Mary’s younger brother. That Mary didn’t travel is not surprising, as it was common practice for a husband to go first: however, Mary had only just given birth to twins and had two other young children, which is a very good reason for not sailing across the Atlantic. William Littlejohn returned to Scotland in 1910, as he is on a UK incoming passenger list arriving from New York in June that year, but he returned to the US a few month’s later. Mary and the four children then followed, leaving Glasgow in June 1911, travelling with Robert Littlejohn, his wife and two children. Robert was William’s brother and had been living in Cambuslang. They were all going to Sunnyside, Utah.

The Littlejohn family settled in Price, Carbon County, Utah, where William worked as a coal mine superintendent. They had a son Robert Lindsay Littlejohn born in 1913. Then Mary Littlejohn nee Lindsay very sadly died in 1919 at the age of 42. Her obituary was published in the News Advocate on 21 August 1919.

Mrs. Littlejohn Goes to Beyond

Rev. P. A. Simpkin has made a second trip from Santa Monica, where he has been spending a vacation, to Carbon County at the call of friends in one of the coal camps. Today he is present in Castle Gate to officiate at the funeral services over the remains of Mrs. William Littlejohn who passed away Monday evening. Services were held in the Amusement Hall at 2 o’clock this afternoon. The Castle Gate choir rendered appropriate selections and the body was laid at rest in the Castle Gate cemetery, Mrs. Littlejohn making the request before she died that her remains lie close to the scenes of years of her activity.

Mrs. Mary Lindsay Littlejohn, after an illness dating from April 12th, passed away at her home at Castle Gate Monday afternoon, August 18th, 1919. Mrs. Littlejohn was operated on at St. Mark’s Hospital in Salt Lake City on April 16th and since that time had been confined to her bed.

Besides her husband, she is survived by two daughters, Janet and Jeanie, three sons, Alex, James and Robert, also by her mother, one sister and six brothers now residing in Scotland, and one brother, Hugh Lindsay, and one sister, Mrs. Robert Barr [Maggie] who are residents of Clinton, Indiana. Mrs. Barr came from Indiana in June to be present at the sick bed of Mrs. Littlejohn, and has labored hard in trying to restore her sister’s health.

Mrs. Littlejohn was very popular in social and other circles and had the distinction of being one of the hardest Red Cross workers in Carbon county. She was ever ready to set her hands in motion to knit socks, wristlets and mufflers for boys taking part in the world’s great war; in fact, she always had their interests at heart. She will not only be missed by her sorrowing husband, children and immediate relatives, but by the whole populace of Castle Gate and by her many friends of Carbon county and other parts of the state.

Her husband William Littlejohn became the Grand Master of the Freemason’s Grand Lodge of Utah and their profile of him, with photo, is at http://www.utahgrandlodge.org/pgm/pgm-william-littlejohn.html He remarried after wife Mary died, to Elsie Hass Tanner, and left a successful career as a mine superintendent to open the Bonnie Theatre (cinema). In the 1940 US census he and his wife are theatre managers and his son James is a projectionist. William can be found on passenger lists in 1931, giving an address in Scotland of Campbell Place, Dreghorn, so he must have taken a trip home on his own, returning via Canada. William Littlejohn died in 1944 at Price, Utah.

His youngest son, Robert Lindsay Littlejohn, went to college and became an oil geologist. He can be found on the 1940 US census at Los Angeles, California with wife Margaret, who had both been living in Salt Lake in 1935. Cathy, who sent me the photos, obituary and link, is Robert and Margaret’s daughter. Robert died in 1984 in California.

This entry was posted in Family history, Genealogy, Photos and tagged Strachan. Bookmark the permalink.

7 responses to “The Strachan and Lindsay line: with photos”