Janet Strachan was my first cousin three times removed, the eldest child of my ggg grandfather John Strachan’s brother Samuel. In 1910 she and her husband Alexander Lindsay celebrated their Golden Wedding, and the event was written up, complete with photographs, in the Kilmarnock Standard in 1910. I found the report online, and it gives a lovely picture of life at that time amongst the Ayrshire coal fields. Below is a transcript of the newspaper article, complete with a scan of the photographs.

We have much pleasure in reproducing the portraits of Mr and Mrs Alex Lindsay, Bellvue Cottage, Dreghorn, whose golden wedding celebrations took place on Thursday evening in the Mure Halls Dreghorn. 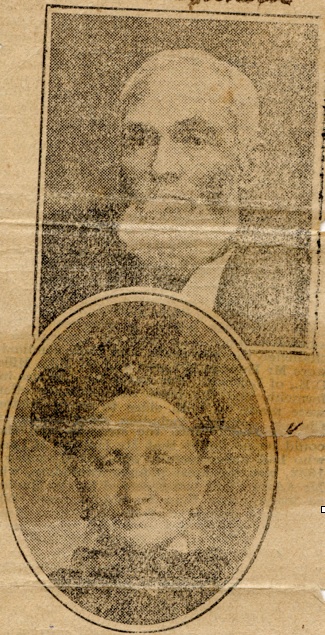 Mr Lindsay was a twin son in a large family and was born at Burnbrae, Tarbolton Parish, in April 1838, so that he is now two years beyond the allotted span. In his young days there was no compulsory nor free education, but he acquired the three Rs before attaining nine years of age, when he left school and went to work in the coal pits. In the latter fifties of last century the mining district of Water o’ Ayr began to decline and this district was opening up new, so in common with many others he migrated to where the new works were starting. On February 3rd, 1860, he was married to Janet Strachan, daughter of the late Samuel Strachan, Dreghorn (his spouse being a year or so his junior). The ceremony was performed by the late Rev. James Milroy M.A., parish minister, and the young couple took up house in the village, and during the fifty years which have intervened since then they have never resided outwith the bounds of the parish. Mrs Lindsay was born at Shewalton, but her mother and father removed to Perceton, which was then in its infancy as a colliery, when she was quite young. Thence they removed to Dreghorn.

The worthy couple have had twelve of a family, eight sons and three daughters all surviving, and all of them filling honourable and industrious positions. The older son, Robert, is manager at the Nursery Pit, Hurlford; the second son is the Rev. Samuel Lindsay of Coatbridge, who within the last few years has come prominently before the public, and who is a fine example of the risen sons of Dreghorn from the coal mine to the pulpit. The other sons, with the exception of one who is in the fire-clay line, follow their father’s occupation in the mines, and there are 42 surviving grandchildren. Mr Lindsay was the crack player in the Dreghorn Quoiting Club forty years ago, and carried off the medal. He was also a keen angler. For many years he has been a member of the Co-operative Society Educational Committee. He gave up work in the mines fully a dozen years ago, after having worked half-a-century underground, and now he and his wife are on the old age pension list.

At the golden wedding on Thursday evening, there was an attendance of over 130 relatives and friends. Rev. Mr Kerr, M.A., presided.

During the evening Mr Robert Lindsay, the oldest son, in name of the family and friends, handed over a purse of sovereigns to his parents. Mr Lindsay suitably replied. Mr John Hutchison proposed the health of the “Bride and Bridegroom” in felicitous terms. The chairman proposed “The Health of the Lindsay Family,” and in reply the Rev. Samuel Lindsay referred to the influence which the home life had in the forming of character. Mr Thomas Gaw gave the sentiment of “The Strangers,” and Mr Allen, missionary, gave a reminiscent address. Mr J Mellor also spoke. Solos were given by Miss Goldie, Miss Fulton, Mrs S Lindsay, Mrs Adair, Mrs A Aitken, Mrs R Barr. A very happy evening was spent.