Today raises the Hendry or Henry question. My grandfather is Henry Strachan in all the records, but my father said his name was actually Hendry. He had an uncle Henry who features today, and in the 1891 census that Henry is listed as Hendry. Perhaps there is some truth in the Hendry name: Hendry was a surname that was fairly common in Ayrshire and there is a Peter Strachan who married Ann Hendry in 1867. Also today, a gggg grandmother from Aberdeenshire, a Ballantine who went to Canada and then California, a Green who died in infancy, and a Strachan who went to Detroit and worked in a car factory.

1 October 1781
Baptism of Agnes Bruce at Crimond, Aberdeenshire my gggg grandmother illegitimate daughter of Andrew Bruce and Isobel Keith. The OPR entry for the baptism says Andrew Bruce was of Cruden parish but was deceased by the time Agnes was born. Agnes next appears in the Longside Kirk Session Minutes in 1800 when she is compeared for being “with child in uncleanness” and gives the father as Alexander Hutcheon, a tailor of Maoins Of Kunmundie. Agnes and Alexander were married in July 1800 at Longside and had 10 children baptised at Longside before Alexander Hutcheon died in 1820: his burial entry in the Longside OPR says he was of Innervedie. Agnes Hutcheon is in the 1841 census at a croft at Red Lums, Longside with her son Alexander, daughter Elizabeth and granddaughter Mary Mutch. By 1851 Agnes has set up home at Crechy Row, Longside and has with her granddaughters Mary Mutch and Isabella Lamb, both daughters of her daughter Elizabeth. In 1861 she is at Mosside croft, Longside with her daughter Margaret, the wife of Charles Davidson, and is age 79 and a pauper. Agnes Hutchison, as her death certificate has her name, died in 1866 at age 84 at Rora, the informant being her son Alexander. The death certificate confirms that her parents were Andrew Bruce and Isobella Keith. Agnes died from a fracture to the thigh bone and old age.

1 October 1842
Birth of my gg uncle Henry Strachan at Shewalton Colliery, Ayrshire, youngest child of Robert Strachan and Margaret Haggerty. Henry’s mother died when he was 6 years old, and in the 1851 census he’s with with his father, stepmother and siblings at Kilwinning. He’s missing from the 1861 census, but in 1865 he married Elizabeth Black at Kilwinning, and gave his address as Kenneth’s Row, which was where his parents and many other relatives lived. Henry was, of course, a coal miner. By 1871 Harry Strachan is at Riccarton and he and Elizabeth have 3 children and a boarder. The family are in Kilmarnock in 1881 and there are now 8 children. By 1891 Hendry, as his name appears in the census, and his family have settled at Crookedholm, where his brother and my great grandfather also settled. Henry Strachan and his wife at at Cowan’s Row, Crookedholm in 1901. Henry Strachan died in 1920 at age 73, and his death was registered at Kilmarnock.

2 October 1868 (born about 1846)
Jean Ballantine was born in about 1846 at Kilmarnock, daughter of Thomas Ballantine and Susanna Strachan and granddaughter of my gggg uncle Robert Strachan and Jean Kelly. She is with her parents at Limekilns, Kilmarnock in 1851 and at Dreghorn in 1861, by which time she was earning her keep as a muslin sewer Jean married coal miner John Anderson at Dreghorn in 1868. According to blog folllower Mac, Jean and her husband migrated to Canada to join her brother Robert in Muskoko, but didn’t stay there and went to California.

1 October 1882
Baptism of Clara Green at St Mary’s, Barnsley, Yorkshire, daughter of my gg grandfather Joseph Green and Margaret Oxley, but sadly Clara died in infancy and her death was registered at Barnsley.

1 October 1895
Birth of Charles Gallacher Strachan at Galston, Ayrshire, son of Robert Strachan and Jane Gallacher and grandson of my gg uncle Henry Strachan and Elizabeth Black. Charles’ father died in 1899 and in 1901 he is with his widowed mother and younger brother at Goatfoot Row, Galston. He married Agnes Steel in 1919 at Kilmarnock, and in 1927 they sailed from Greenock to Canada and then did a border crossing into USA. Charles gave his occupation as coal miner and they were not accompanied by any children. The 1927 City Directory for Detroit has Charles Strachan and wife Agnes at Cecil Avenue living with Charles’ widowed mother Jean. |Charles and Agnes can be found in the 1930 USA census at Cecil Avenue with two young children and Charles’ mother Jeanie: Charles was working as a machine operator at a car factory.

Only one event today: a distant Aberdeenshire ancestor. And I’m up to date again.

27 June 1747
Baptism of Isobel Keith at Crimond, Aberdeenshire who was born at Kirktoun, Crimond, the daughter of James Keith, mother not named. I think she is the Isobel Keith who gave birth to the illegitimate Agnes Bruce (see previous post): if so, then Isobel is my ggggg grandmother. The 1781 baptism entry for Agnes Bruce, who was baptised at Crimond, gives her parents as Andrew Bruce in Cruden now deceased and Isobel Keith, and states that Agnes was “begotten in fornication”. The sponsor was John Farquhar in Little Bilbo. In 1784 there is a marriage of Isobel Keith and James Wylie at Crimond, but no baptisms of children of this couple have yet been found.

The Longside Kirk Session Minutes proved to be fruitful: that particular kirk session was clearly very keen to track down and deal with couples who indulged in pre-marital sex. Given that such couples were fined, I’ve always thought that the zeal with which this was done but the kirk sessions was only partly an attempt to “improve” the behaviour of parishioners: the financial contribution it made, especially to the Poor Box, must have been a major incentive. The fines were not insubstantial – possibly a few week’s wages.

While trawling through the Longside minutes in the reading room in Edinburgh, I noted down any mentions of surnames that appear on my family tree: Hutcheon/Hutchison, Logan, Bruce, Matthew, Watt, Sangster, Fraser, Williamson/McWilliam, Booth and Morgan, all made an appearance from the mid 1700s to the 1830s. I didn’t get any further than that, although the number being compeared for fornication was reducing by then. As the number of illegitimate births wasn’t decreasing – in fact it was probably increasing – it seems that the kirks were becoming more lenient by then, or simply couldn’t keep up with the number of cases. I have yet to go through my family tree to see whether the ones I made a note of relate to people on my tree, but I suspect a number of them do.

But in the minutes for 1800 there was one case which very obviously was my ancestor. On 20 April 1800, Agnes Bruce was interrogated by the kirk session for being unmarried and with child, and gave the father’s name as Alexander Hutcheon. They are my gggg grandparents. I see it as they were simply being human.

Click on the image to see it at larger size

They were then both called before the kirk session on 4 May 1800, and Alexander did the gentlemanly thing and admitted he was the father. Then on the 15 June they were absolved from guilt upon payment of a fine of 10 shillings each. 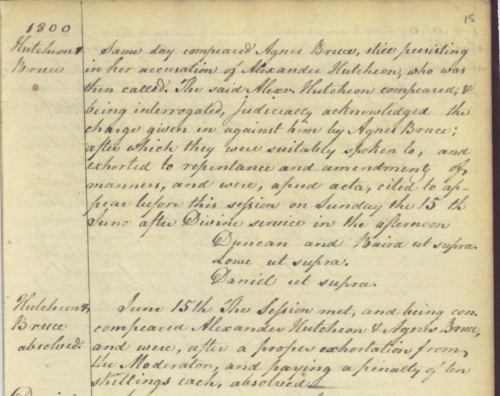 Click on the image to see it at larger size

From this I now know that Alexander Hutcheon, born 1777, was a tailor at Kinmundy, which is where my ggg grandfather William Fraser was possibly brought up if he lived wit his mother when he was a child, and in 1800 Agnes Bruce, born illegitimate in Crimond, was at Parkhill, just up the road – she may well have been working as a farm or domestic servant.

Agnes and Alexander married on 26 July 1800 at Longside, and their first child James was baptised on 6 September 1800. They tended to get babies baptised within a few days of birth back then, so he was probably born late August or early September, so Agnes would have been about 5 months pregnant when she was first compeared in April. Agnes and Alexander went on to have a large family, with Alexander Hutcheon dying in 1820 at age 43 and Agnes dying in 1866 at the age of 84.

Their daughter Christian then made an appearance in the minutes in 1823 when she gave birth to an illegitimate son – more of that tomorrow.